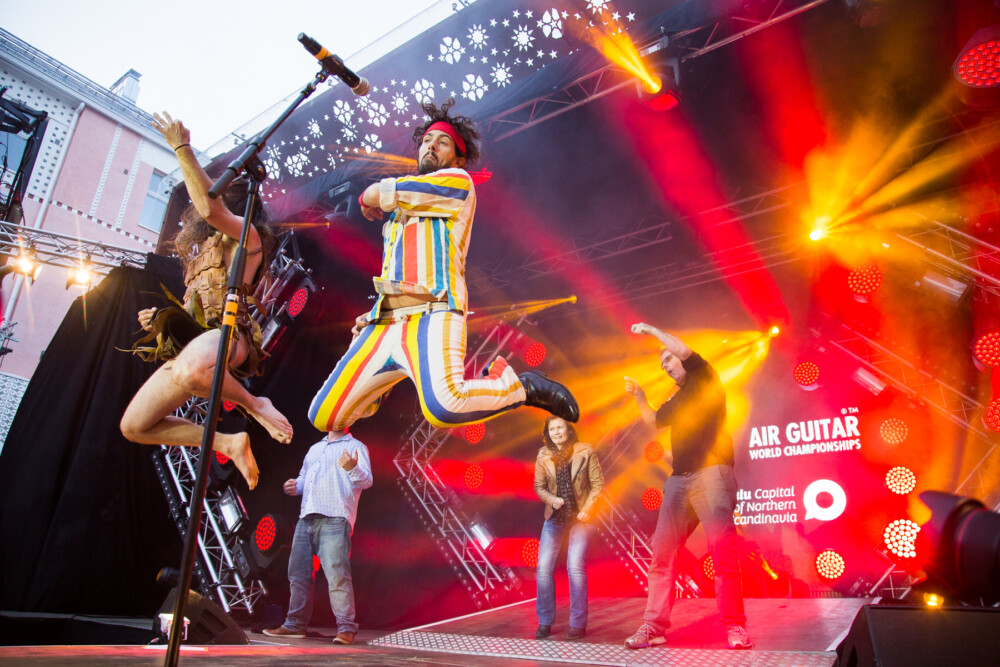 Peace, Love and Rock‘n’Roll at Rotuaari

Rock will fill Rotuaari Square at the end of August, but not a single actual guitar can be seen on the stage. Air guitar playing is not instrumental sports or arts, nor does it require any special skills. The Air Guitar World Championships offer everyone an equal opportunity to enjoy music, performing and togetherness.

The Air Guitar World Championships, whose main agenda is to promote world peace, will once again bring international air guitarists from all over the world to Oulu. Peaceful gunpowder has been tooted into the atmosphere for over 20 years. The battle, which once even raised heated discussion, has now become an international media magnet of good mood.

“The styles of the performers are very personal. You can expect humour, skill, and, above all, joy of doing. World peace and people’s connection to each other is a strong part of Air Guitar’s philosophy, and the spirit of the events is in line with that,” describes Anna-Kaisa Kettunen, the producer of Airnest Productions, which organizes the event.

From a Dark Horse to a World Champion

This year, the competition will be held on 24–26 August. Although everything culminates in the world championships final on Friday, the Air Guitar week is full of all kinds of other great things.

On Tuesday, it is possible to immerse yourself in the world of air guitar for free by watching a film about air guitar in Oulu’s rock mecca 45 Special. On Wednesday, air guitarists will set foot in Oulu in the form of the Airientation orientation day. On Thursday, Justin “Nordic Thunder” Howard, who hosts the entire competition, will host the Carte Blanche music video screenig he curated for the Oulu Music Video Festival happening in Oulu that week. The legendary Dark Horse Qualifying Round will also take place on Thursday.

The Qualifying Round is one way to the finals. The champions of the participating countries get to the finals automatically, but final places are given to other brave guitarists through qualifying. A place in the final can therefore be obtained by a so-called dark horse, a competitor coming from around the corner, who has the opportunity to win the entire competition.

The Dark Horse Qualifying Round at the bar 45 Special is a spectacle that you don’t want to miss. There will be sweaty and tight struggles, spectacular air guitar performances, great atmosphere and superb team spirit. Come and enjoy the show, and most of all: make air, not war!